What is Beauveria bassiana?

Beauveria bassiana is a fungus that grows naturally in soils throughout the world, although modern farming practices have greatly reduced the occurrence of this beneficial organism. It can form a symbiotic relationship with plants and has an extremely broad host spectrum. Beauveria bassiana can control and even eliminate pathogens when inoculated into different crops. It achieves these benefits in several distinct ways, including by initiating Induced Systemic Resistance (ISR) a process that turns on the host plants defenses to a low level. This priming of the plant’s defenses leads to greater resistance to a broad range of pathogens and pests. The symbiosis can also eliminate pathogens by antibiosis (the beneficial fungus secretes metabolites and proteins that act against pathogens), mycoparasitism (where the Beauveria parasitizes invading fungi), or simple competition (the Beauveria hyphae colonize the entire plant and leave no room for the growth of pathogens). The plant tissues can exchange carbon and nitrogen with Beauveria bassiana and this has been shown to promote plant growth and increase yields under field conditions. The broad host range and many beneficial effects of Beauveria bassiana symbiosis on pests, pathogens, growth, yields, drought responses, toxin levels, biochemical levels has led to Beauveria bassiana being called “The Swiss Army Knife of Biological Control Agents.”

Who was Agostino Bassi? 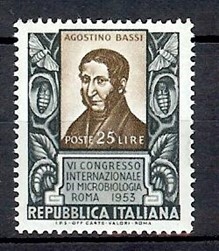 Agostino Bassi (25 September 1773 – 8 February 1856), was an Italian entomologist who discovered that numerous diseases are caused by microorganisms. His work preceded that of Louis Pasteur, who had a portrait of Bassi in his office. Bassi announced his discoveries in 1835 and thus, he preceded both Pasteur and Robert Koch in formulating the germ theory of disease. The fungus that he was studying would later be called Beauveria bassiana in his honor, and Beauveria would become the first Biological Control Agent (Biological) in the world.