Taken from our press release September 9, 2020.

LPC Naturals, a division of Lackawanna Products Corporation, a privately-owned commodity trading company announced today that growers and researchers have provided compelling evidence from field trials that their Beauveria bassiana products, SPE-120 and SBb 2.5, can have major beneficial effects against some of the main causes of the world’s crop losses in wheat, rice, maize, and soybean.

“We truly believe this is a game changer,” said Dr. Paul Rushton, LPC Naturals’ Chief Scientific Officer. “We are looking not only at a change in the way people grow crops, but also a change in the way people think about growing crops. Using our innovative natural products can bring major benefits against the world’s leading causes of crop diseases and reduce the dependency on chemicals. Results from farmers and growers show that the future of farming is natural rather than chemical.”

Crop pathogens and pests reduce the yield and quality of agricultural production. They cause substantial economic losses and reduce food security at household, national and global levels. Recently, international researchers based in France, the United States, and the Netherlands established the losses by leading pests and pathogens globally in wheat, rice, maize, soybean and potato (https://www.nature.com/articles/s41559-018-0793-y). The leading causes of crop loss were Wheat Leaf Rust, Rice Sheath Blight, Fusarium in maize, and Soybean Cyst Nematodes. Field trials now indicate that our products can have major beneficial effects against these pests and pathogens.

In the study, Wheat Leaf Rust caused losses of 3.25% globally and is the leading cause of pathogen and pest related wheat losses globally. Field data from Saskatchewan in summer 2020 showed that wheat treated with LPC Naturals’ SPE-120 showed no signs of Wheat Rust in the first half of the growing season, whereas Rust was present on untreated plants.

The grower, from Archerwill, Saskatchewan commented, “I have observed that the SPE-120 treated fields display a near complete resistance to Leaf and Stem Rust during the first half of the growing season. When the Rust did appear, after the wheat had headed out, it was less than half of what could be observed in the untreated fields.” He added, “Overall the SPE-120 seed treatment provides a high degree of protection from Leaf and Stem Rust.” 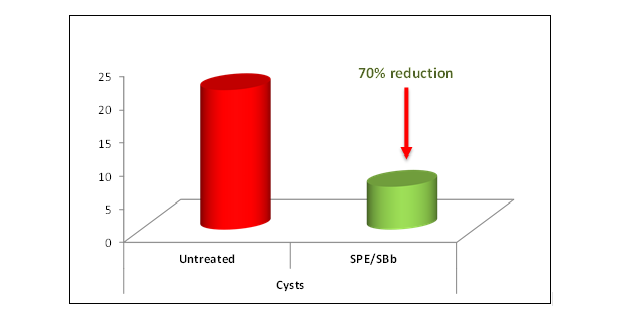 Soybean Cyst Nematodes accounted for 4.24% losses in soybean world-wide. Field trials in North Carolina in 2019 with LPC Naturals’ SPE-120 and SBb 2.5 products showed a significant reduction in cyst nematodes.  At 28 days, a reduction of 33.2% was measured and at harvest, cyst reduction was 70.14% and egg reduction 67.14%.

Stalk and Ear Rots caused by Fusarium caused losses of 7.26% of the world’s maize crop.

Data from more than twenty farms over three separate growing seasons showed that treatment of corn seeds with SPE-120 led to dramatic reductions of 77%-99%, in fumonisin a toxin produced by Fusarium. This is the result of a drastic reduction in Fusarium infection after SPE-120 treatment.

Sheath Blight was estimated to cause rice crop losses of 6.78% world-wide. Published field trial results (https://europepmc.org/article/med/20069626) showed that rice seedlings treated with Beauveria bassiana spores (the active ingredient in LPC Naturals SPE-120 and SBb 2.5 products) led to a reduction in Sheath Blight of between 66% and 69% compared to untreated plants.

“The ability of our products to reduce the impact of one of the world’s major diseases in crop plants would in its own right be a significant step forward.” added Nicholas Bianco, Director of Business Development at LPC Naturals. “Reducing the effects of the major diseases in corn, wheat, rice, and soybean is quite staggering. The bonus is that LPC Naturals SPE-120 and SBb 2.5 products can reduce the impact of many diseases, not just the most economically important ones.“

Chief Marketing Officer Christopher J. Lent added “We are hoping to be able to help growers immediately as they start to plant cover crops and winter wheat. We are also developing exciting new products for indoor farming that will be available in 2020.”

Lackawanna Products Corporation Announces the Formation of LPC Naturals Dr. Rushton talks about LPC Naturals and the Cannabis/Hemp industries on the Win-Win With Cannabis Radio Show

Increase in profit of up to $150/acre from rice grown in Arkansas with our SBb 2.5 product