Beauveria bassiana and a Safe and Environmentally Friendly Future for Agriculture

Probiotics can have major beneficial effects on human health and the probiotics industry is current worth about $50 billion with a yearly increase of 7%.

Probiotics can have major beneficial effects on human health and the probiotics industry is current worth about $50 billion with a yearly increase of 7%.

The biology behind the efficacy of probiotics centers on your microbiome, which is a community of microorganisms that live in your body, mainly your digestive system. Some of these microbiome species can bring benefits to human health whereas others do the opposite and can cause disease. The logic behind probiotics is that you are adding specific beneficial organisms to your microbiome and that these organisms together with food and your digestive system have beneficial effects on your body’s biochemistry resulting in improved health.

These benefits can be very wide-ranging, and evidence suggests that probiotics can have positive effects on stress/mood, brain health, obesity, metabolic health, food intolerances, heart health and immunity.

Soil microorganisms are the most abundant organisms in soil and in a parallel to the microbiome in humans, are collectively called the rhizobiome. Organisms in the rhizobiome are responsible for driving nutrient and organic matter cycling, soil fertility, soil restoration, and plant health. Beneficial microorganisms include those that create symbiotic associations with plant roots (rhizobia, mycorrhizal fungi, actinomycetes, diazotrophic bacteria), promote nutrient mineralization and availability, produce plant growth hormones, and are antagonists of plant pests, parasites or diseases (biocontrol agents). Just as with probiotics and the human microbiome, these rhizobiome organisms are already naturally present in the soil. Similarly, to humans taking probiotics, it is often beneficial to plants to increase the populations of these beneficial microorganisms by inoculation that enhances their abundance and activity.

So how exactly do these probiotic species interact with plants and cause beneficial effects and what species of bacteria and fungi can be viewed as probiotic? Well, the best-known examples are mycorrhizae which are fungi that form mutualistic interactions with plant roots so that both the plant and the fungus benefit. The plant gives carbohydrates (such as glucose and sucrose from photosynthesis) to the fungus. In exchange, the fungus gives the plant water and minerals, and this can result in increased plant growth and yields. The use of mycorrhizae in growing plants is widespread and soil containing mycorrhizae are available at garden centers and hydroponics stores. Another genus of fungus that is also used in agriculture and that also acts as a beneficial endosymbiont is Trichoderma. Trichoderma grows in and on the root of the plant and is used as a biocontrol agent (“Biological”) especially against fungal diseases of plants.

In addition to mycorrhizae and Trichoderma, there are other microorganisms that can be used to promoter plant growth and can also be viewed as probiotics. Examples include pseudomonads (Pseudomonas fluorescens, P. putida, P. gladioli), bacili (Bacilus subtilis, B. cereus, B. circulans) and others (Serratia marcescens, Flavobacterium spp., Alcaligenes sp., Agrobacterium radiobacter). Products that contain mixtures of many of these beneficial species are available commercially to improve plant health and growth, although the contribution of each species in a complex mixture is often unclear.

Of all the “probiotics for plants” perhaps the most promising is Beauveria bassiana. This fungus grows naturally in soils throughout the world, although modern farming practices have greatly reduced its occurrence. It forms a symbiotic relationship with plants and has an extremely broad host range. Unlike the better known mycorrhyzae and Trichoderma, Beauveria bassiana is systemic (it grows throughout the entire plant, not just the roots) and this can bring major benefits because it is close to invading pests and pathogens rather than being restricted to the soil. It can control and even eliminate pathogens when inoculated into different crops. It achieves these benefits in several distinct ways, including by initiating Induced Systemic Resistance (ISR) a process that primes the plant’s defenses and leads to greater resistance to a broad range of pathogens and pests. The symbiosis can also eliminate pathogens by antibiosis (Beauveria secretes metabolites and proteins that act against pathogens), mycoparasitism (where the Beauveria parasitizes invading fungi), or simple competition (the Beauveria hyphae colonize the entire plant and leave no room for the growth of pathogens). The symbiosis between Beauveria and the plant also promotes growth and the production by the plant of important metabolites.

The benefits of using Beauveria bassiana as a “plant probiotic” are many and the economic benefits can total well over $100 per acre in field grown crops. The many beneficial effects of the Beauveria bassiana symbiosis on pests, pathogens, growth, yields, drought responses, toxin levels, and biochemical levels (such as cannabinoids, terpenes, and sugars) has led to Beauveria bassiana being called “The Swiss Army Knife of Biological Control Agents.” Check out our products SBb2.5 and SPE-120 (for organic use) for large outdoor grows (lpcnaturals.com) and the Prime Superior Range for all indoor grows (primesuperior.com)
So, we return to the parallels between probiotics of humans and probiotics of plants. The Beauveria bassiana symbiosis can have major beneficial effects on pests, pathogens, growth, yields, drought responses, toxin levels, and biochemical levels. Probiotics in humans also have many positive effects such as on stress/mood, brain health, obesity, metabolic health, food intolerances, heart health and immunity. In fact beneficial effects on diseases, metabolites, growth and nutrient absorption are shared between the two systems.

Given the huge size of the global agriculture industry, a $50 billion plant probiotics industry to rival or even surpass the human probiotics industry does not seem unreasonable. This is even more likely as the world moves away from “Forever Chemicals” and seeks safer, more environmentally safe alternatives to pesticides and other agricultural chemicals. 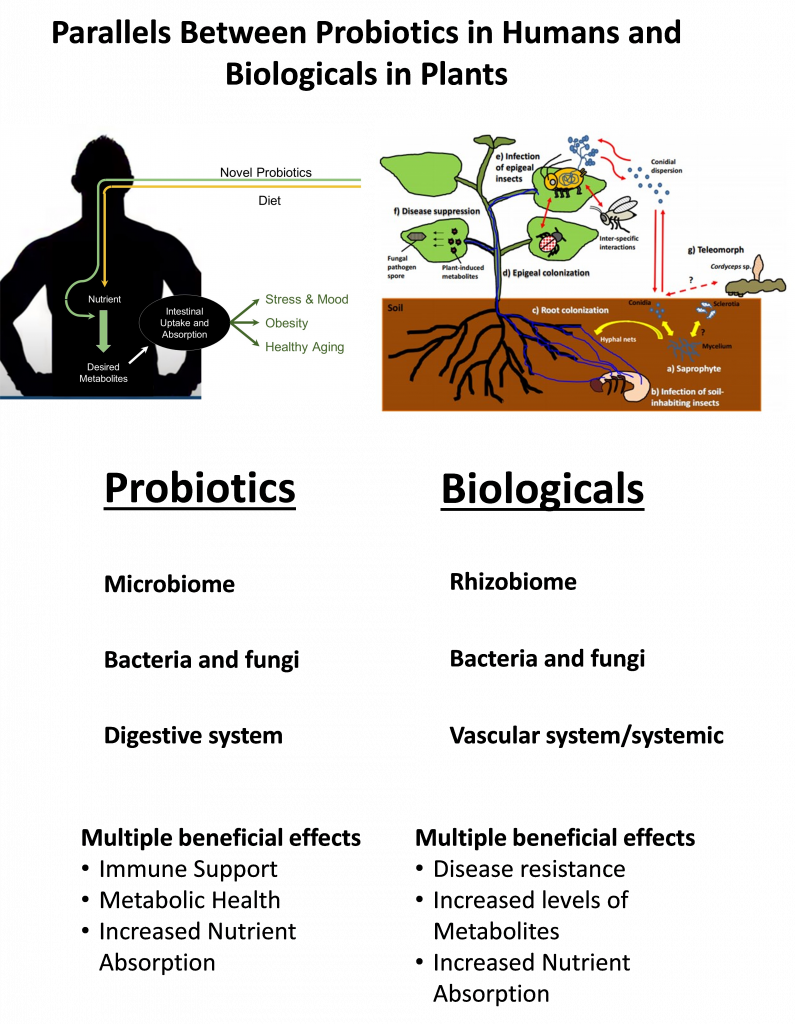